Flowing and stagnant waters have significant role in nature. They work as regulators of climate extremes, they fill and clean underground water and represents important habitat for many of plant and animal species. Many of Goričko creeks are still preserwed in their natural state, while all four lakes are atificialy made. Nevertheless all lakes have gained important value as important habitats through the years.

The only river on the area of Goričko Nature Park is Ledava river, which is also the longest river in Prekmurje region. It springs in Pichla village in Austria. It crosses Austria-Slovenia border by Sotina village, where sets its stream towards the south. Ledava river has formed the widest and longest valley in Goričko Nature Park and created conditions for many wetland habitats. Despite its regulation, many of these habitats like wet meadows, marshes and swamp forests remained. On the southern part of the valley Ledava fills the largest lake in Goričko Nature Park - Ledava lake. 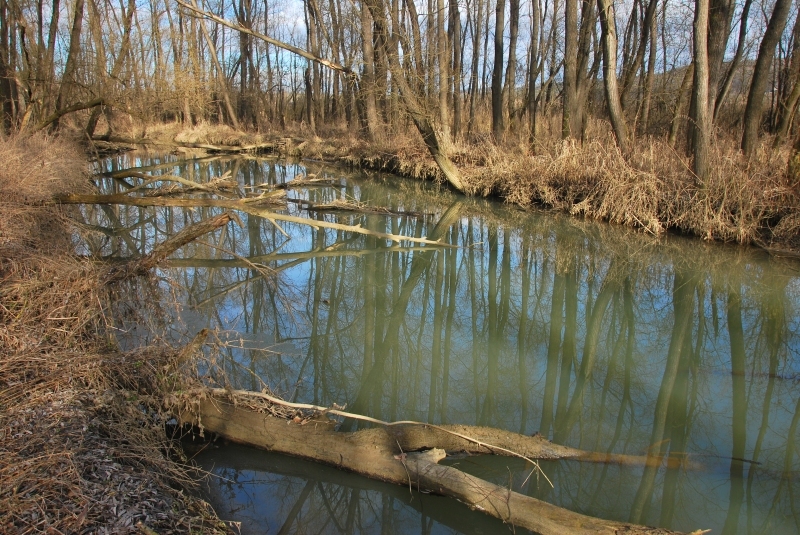 The Velika Krka and Mala Krka creeks are the two major creeks in eastern part of Goričko. Velika Krka springs in the village of Čepinci near northern border with Hungary. It flows towards east and leaves Slovenian teritory near Hodoš village. velika Krka has mostly unregulated stream with plenty of vegetation. it is important habitat for the Common kingfisher (Alcedo atthis), Eurasian otter (Lutra lutra) and European beaver (Castor fiber). 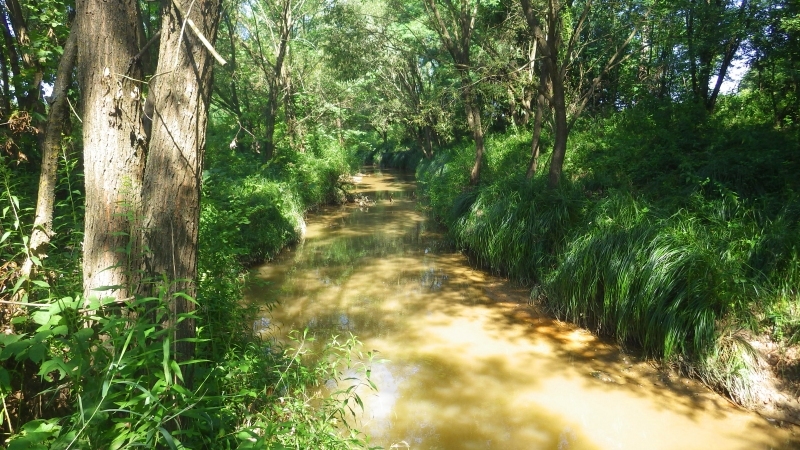 The Mala Krka springs under the Praponek hill on the northern part of Kuštanovci village. From there flows towards east through Križevci and Domanjševci village, where it crosses Slovenia-Hungary border. The Mala Krka fills the Križevci lake and is important habitat for Eurasian otter (Lutra lutra), European beaver (Castor fiber) and several fish and dragonfly species.

Ledavsko jezero lake is the largest water surface in Goričko Nature Park. It is an artificial lake, made in 1970s with the purpose to prevent flooding of Ledava river in downstream villages and cities. The lake covers aprox. 130 hectares, but can also expand to aprox. 218 hectares in heavy rainfall. The most diverse is northern part of the lake. Here we can find marshes, wet meadows and flooded forests with plenty of wildlife species. 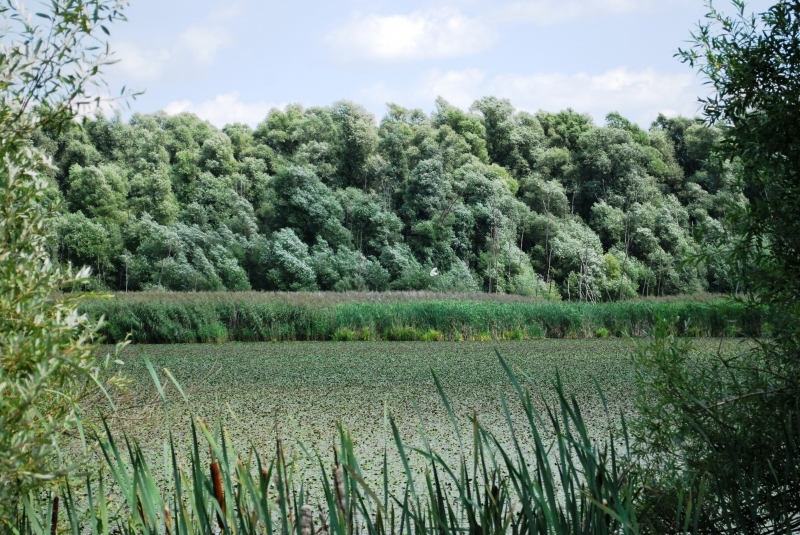 On the norhern part of the Ledavsko jezero there is the biggest forest of white willows in Goričko (photo: Tomaž Koltai)

On the lake we can notice 50 species of water birds among which are White-tailed eagle (Haliaeetus albicilla), Osprey (Pandion haliaetus), Greylag goose (Anser anser), Great crested grebe (Podiceps cristatus) and others. The lake is also important hatching place for many species of amphibians and a habitat for over 40 species of dragonflies, fishes and Eurasian otter (Lutra lutra). The lake is encircled with theme trail named "Bernardina pot" which offers recreational possibilities. Fishing on the lake is perrmited with the fishing license given by Fishing association Murska Sobota. Recreational activities on the lake are not welcomed. 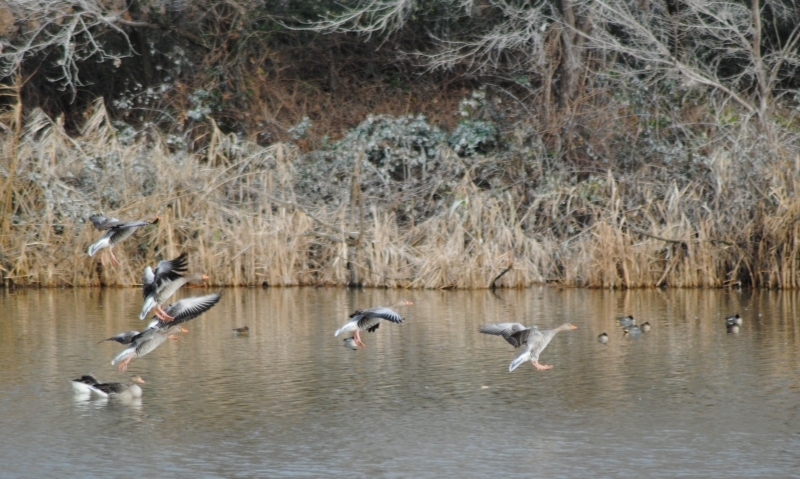 Hodoško jezero is a lake on the northeastern part of Goričko Nature Park, on the north part of the village Hodoš. It was created in the 1980s and 90s with the daming of Dolenski potok creek. The purpose of the daming was to prevent flooding of the creek and providing water for field mitigation as well as enabling possibilities for fishing. The surface of the lake is aprox. 5 hectares. The lake represents important habitat for Little bittern (Ixobrychus minutus), Great reed warbler (Acrocephalus arundinaceus) and Water rail (Rallus aquaticus). For hunting spot it is used by Black stork (Ciconia nigra), Great egret (Area alba), Grey heron (Ardea cinerea) and White-tailed eagle (Haliaeetus albicilla). The lake is also a habitat for Eurasian otter (Lutra lutra) and European beaver (Castor fiber). The lake is encircled with theme trail based on the ecology of the lake. 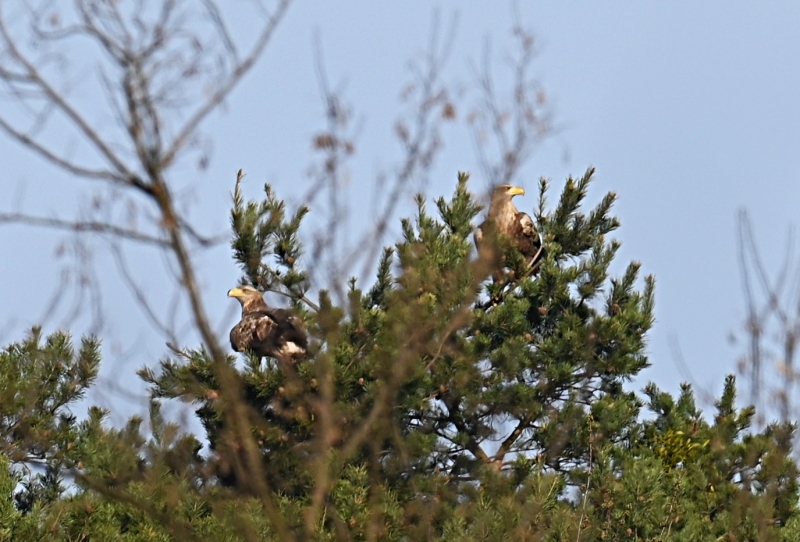