Streams and river in their natural state are inhabited by some rare and endangered species of fish, which have already disappeared from many watercourses elsewhere in Slovenia. Among them are species of conservation importance.

The bitterling (Rhodeus sericeus amarus)  has a particularly interesting biology. This small fish, up to 9 cm in size, needs the presence of the thick shelled river mussel (Unio crassus). The reproduction of bitterling depends exclusively on the presence of this mussel. Female bitterling with a special organ called ovipositor lays eggs inside the mussel. Meanwhile, the male bitterling sheds his sperm near the mussel and when the mussel draws the water with the sperm, fertilization of the eggs occurs inside the mussel. The young bittering live in the safe interior of the mussel for the first few weeks and are protected from the predators. 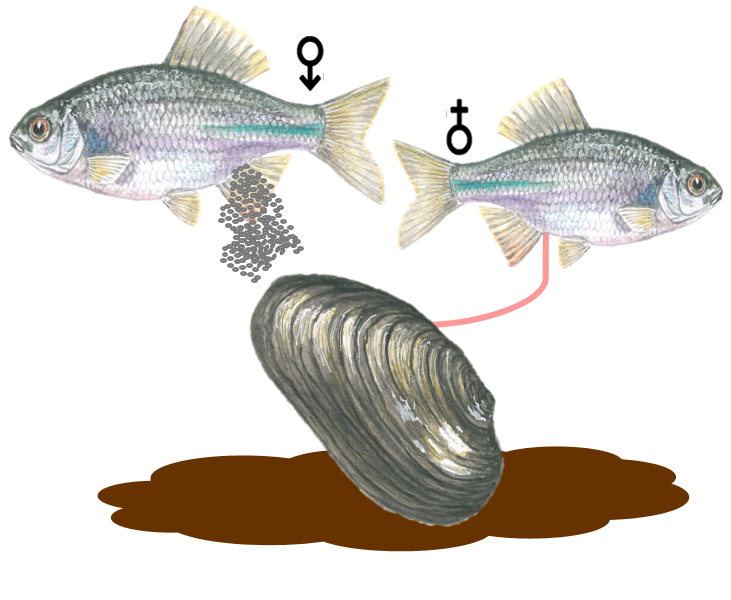 Bitterling returns the favor to the mussel, as the larvae of the mussel live in the bitterlings gills.Both species are actively protected within the Natura 2000 site Goričko.In the past, female bitterling were used as a " human pregnancy test". If after womans urine was injected into fish, the females ovipositor protruded, that confirmed that woman was pregnant. Bitterling has a high and laterally compressed body with a small head, the hips are vividly metallic and a blue line runs from the middle of the body to the caudal fin. It feeds on plants, rarely on worms and insect larvae.

Cobitis elongatoides is is a small, up to 15 cm long fish up, weighing just 15 g. The body is white-yellow with brown spots on the back (12-19 spots) and hips (10-13 spots) and 6 growths around the mouth. It feeds on tiny aquatic invertebrates and dead plant particles. Its habitat are medium to fast flowing shallow waters with a sandy bottom.

Ukrainian brook lamprey (Eudontomyzon mariae) is easily recognizable by its elongated, snake-like body. It is up to 22 cm long. Adult has a toothed, funnel-like sucking mouth. The development of the larva takes 3.5 to 4.5 years and then another 10 months for the adult animal to reach sexual maturity. The adult animal then spawns so that the female lays her eggs in shallow nests, previously dug into the bottom by the male. They die after spawning and so the lifespan of a sexually mature adult animal is only two to three months. The larvae feed on organic debris and microorganisms. Lampreys live in lowland rivers and streams, where they are the majority of the time buried in a soft, sandy or muddy bottom enriched with organic debris.