AMPHIBIANS
Amphibians are classified in two major groups - order Anura with frogs and toads and order Urodela with salamanders and newts. Salamanders are amphibians with lizard-like appearance who have the internal fertilisation.This are the fire salamander (Salamandra salamandra), the Alpine newt (Mesotriton alpestris), the smooth newt (Lissotriton vulgaris)and the Italian crested newt.

The Italian crested newt can grow up to 25 cm in length. The skin on the abdomen is yellow-orange with black spots. The dark throat is sprinkled with many tiny bright spots. Males have a pronounced dorsal ridge during the mating season. It is widespread in the Apennine and Balkan Peninsulas and in parts of Central Europe. It is widespread in Slovenia, but rare. It is threatened by habitat loss, deforestation, changes in agricultural use, water pollution and the introduction of predatory fish.

The yellow-bellied toad is a small (up to 5.5 cm large and 12 g heavy) amphibian with gray-brown upper side of the body and yellow-black abdomen. This pattern is unique to each animal like a fingerprint.It lives in open, shallow waters with little vegetation. It is widespread in Central and Southern Europe. 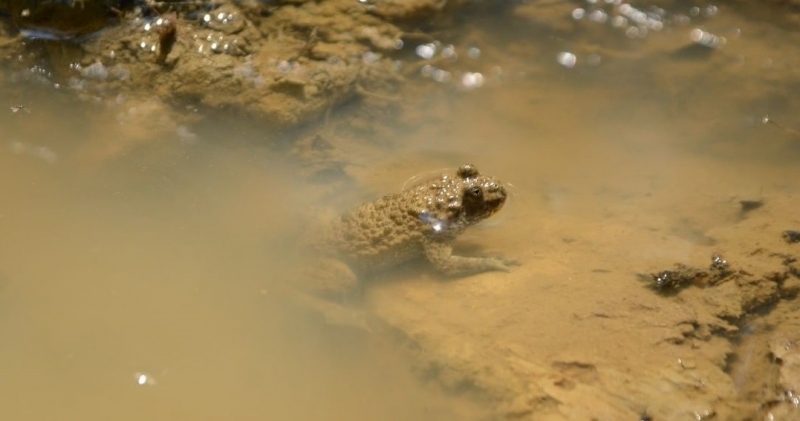 The only representative of the order of turtles is the European pond turtle (Emys orbicularis). This only native species of fresh-living turtle is rare and widespread locally in Goričko. In the past, a non-native pond slider (Trachemys scripta) was also found in Goričko.

The slowworm or blingworm (Anguis fragilis), despite its "snake-like" appearance, belongs to the group of lizards. It has a eyelids and in case of danger it can shed their tail.The blindworm is harmless and useful inhabitant of our gardens, as it feeds on snails, earthworms, spiders and insects. It is widespread throughout Slovenia and in Goričko.

Among the lizards, the most common are the sand lizard (Lacerta agilis) and the European green lizard (Lacerta viridis). Sand lizard is commonly known among locals by the name "martinček" and thats the general name for all of the lizards.Sand lizard has the largest population in Prekmurje and Podravje regions. Sand lizard is easily recognized by a darker pattern on the back with a bright dashed line on the sides of the dark pattern.The European green lizard is largest lizard in Slovenia with a body lenght up to 40 cm. Green lizard has a uniform green body with small dark spots, males have a blue neck. 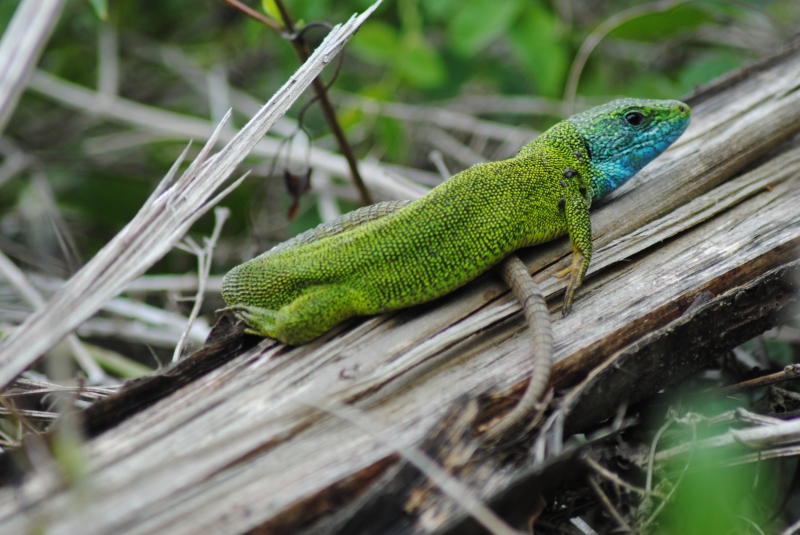 The European green lizard is the largest lizard in Slovenia

Smooth snake (Coronella austriaca) and grass snake (Natrix natrix) are widespread non-venomous snakes.Smooth snake is easily recognized by u-shaped dark marking on the top of its head. Its body scales are flat and gives the snake s smooth texture to the touch - hence the name "smooth". The grass snake lives around waters where it preys for amphibians and small fish. The most characteristic feature is the white-yellow collar behind the head. The Aesculapian snake (Zamenis longissimus) can grow up to 2 m in lenght and is therefore among the largest European snakes. It had a very big cultural significance in ancient Greek and Roman mythology and is a symbol of human medicine and pharmacy even today. Similar to other snakes it is non-venomous.

The presence of the venomous snake, European adder (Vipera berus), is still not confirmed despite one alleged sighting near Vučja Gomila years ago. 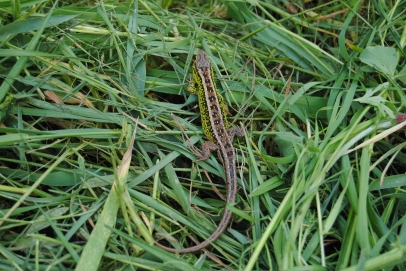