Hoopoe (Upupa epops) is probably the most exotic looking and markant bird species in Goričko.Its unsual appearance is unmistakeable and easily recognisable. Hoopoe is a typical bird of a preserved cultural landscape. Among locals hoopoe is better known by name "upkaš" after its typical "up-up-up" song which can be heard most often in early morning. In Slovenske gorice region it is known by the name "mutec". Hoopoe is also one of the flagship species of Goričko Nature park. 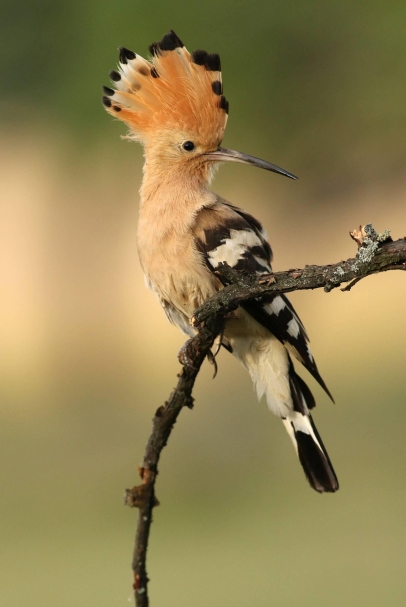 Description
Hoopoe was for centuries classified in the clade Coraciiformes, which also includes kingfishers, bee-eaters, and rollers. Recently, according to genetic research, hoopoe now belongs in the order of Bucerotifermes with hornbills. It measures between 20 cm and 32 cm in length, has a wingspan of between 42 cm and 46 cm and weighs between 47 g and 87 g. The most recognizable attribute is the crest on the head, which spreads like a plume when landing. The head and chest are light orange in color, wings and back are black-and-white striped.Despite the colorful feathers, Hoopoe hides extremely well in the grass. It is easier to spot it only during a flight reminiscent of the flight of a large butterfly. The long and slightly curved beak allows Hoopoe to search for food deep in the ground.

Hoopoe easily hides in the grass

Food and migration
Because of its bill Hoopoes search for prey deep in the soil. The majority of the prey represent molecrickets (Gryllotalpa gryllotalpa), field crickets, caterpillars, beetle larvae and spiders. In a study of prey composition of Hoopoe in Goričko molecrickets account for 35 % of all prey items and as much as 81 % of all prey biomass. 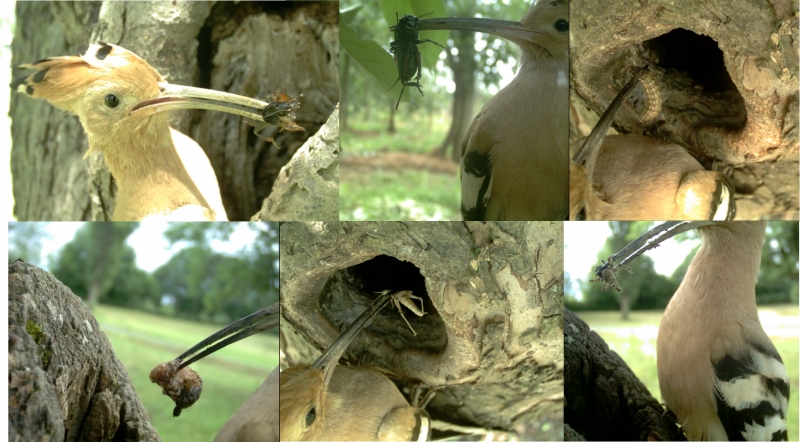 Hoopoe spend the winter in sub-Saharan Africa. The first birds can return to breeding sites at the end of March. They start to migrate toward the south already in August.

Breeding
Hoopoe is a cavity nesting bird. Most often they nest in a tree cavity in high-trunk fruit tree in old meadow orchards. In recent years more and more pairs choose to nest in the nest-boxes. In the Karst and Primorska region some pairs also nest in dry stone walls. In Goričko, the pair even nested in an old wine barrel in the yard of the house. The female lays 4-7 eggs and then incubates them for 16-18 days. Only the female incubates the eggs. The chicks are fluffy white when they hatch, Young birds fly at the age of 26-32 days. Nesting females and chick repel predators with a bad-smelling oily secretion of the uropigeal gland and feces with which they target the intruder. Symbiotic bacteria that live in the dorsal gland produce a secretion which prevents the development of the bacteria that corrode feathers. A pair of hoopoes can successfully nest twice in a year, but it is not uncommon for a female to abandon the chick before they become independant and start to nest for a second time with another male. In that case only the father takes care for the young until they leave the nest. 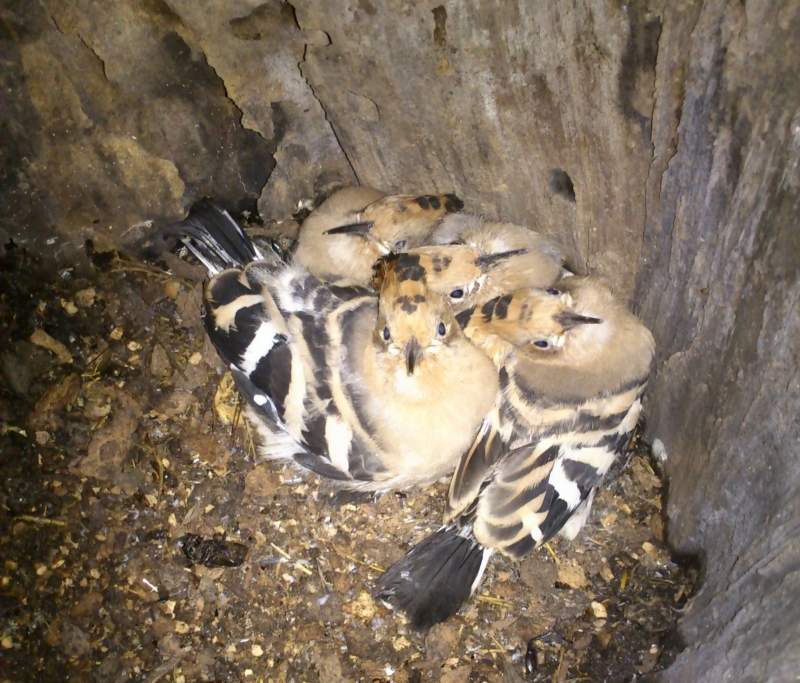 Young hoopoes in the natural cavity

Hoopoe is a fairly common nesting bird, distibuted locally in Slovenia. It is common in the Karst region, Vipava Valley and Pivka region. Not so long ago, it was also common in Slovenske gorice, Haloze and Goričko, but had unfortunatelly in many of those places practicly disappeared in the last decade. At the end of the 1990s, it was estimated at more than 200 pairs breed in Goričko. Today estimate is around 50 nesting pairs. Hoopoe is mainly threatened by the disappearance of extensive meadows, as it has problems to find prey in dense and tall grass, the conversion of meadows into fields, the disappearance of old high-trunk orchards as nesting sites and by urbanization by arranging the surroundings of houses. Grassy yards and macadam paths are being replaced mainly by paved arrangements. The impact of hunting on migration in the Middle East and North Africa is unknown, although many European hoopoes are known to be victims of hunting.
Due to the threats, hoopoe is being actively protected within Natura 2000 site Goričko and is also a protected species. On the Slovenian red list of endangered species it has the status of critically endangered species (E1). 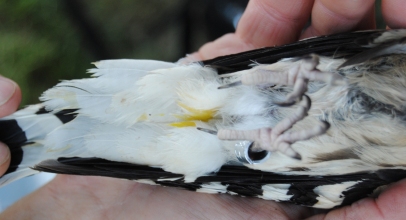 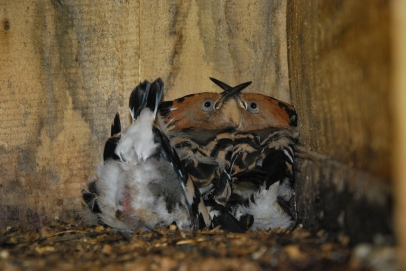