In LIFE FOR SEEDS project, 8.3 ha meadows were sown with seed mixtures.

In the past months, we have been very active in LIFE FOR SEEDS project at Goričko Nature Park. Firstly, we were intensively engaged in collecting seed mixtures on dry orchid meadows of habitat type 6210 (*). We collected seed mixtures with a special brush harvester and transported them to castle Grad for drying. Dried material was sifted to separate seeds from chaff. The whole process took several months before seed mixtures were ready for sowing. Sowing was done manually, with the help of Nature Park employees. We collected a little more than 200 kg of dry seed mixture on a total of 20 ha of dry meadows, which we then sowed on 8.3 ha of species-poor meadows. We tried to mix all the collected and dried seeds as thoroughly as possible in order to obtain a homogeneous mixture, which was then sown on 16 meadows (Hodoš, Dolenci, Budinci, Čepinci, Neradnovci, Ženavlje, Šulinci, Panovci, Kančevci, Lončarovci and Fokovci) and two arable fields in Lončarovci. 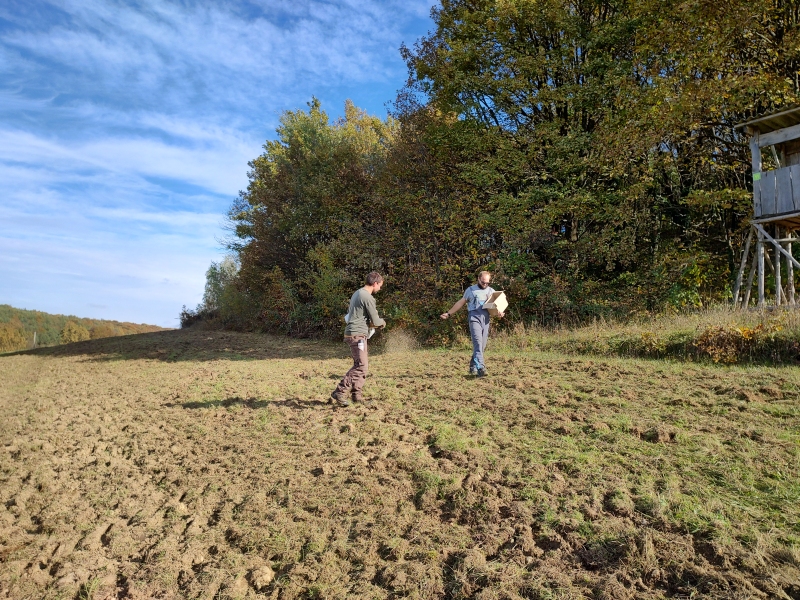 We tried to sow all the meadows evenly, with a quantity of 30 kg/ha. We did the same in arable fields, but used a slightly larger quantity of seeds, 40 kg/ha. We set up a few trial areas, where germination success will be tested in relation to different ways of preparing the substrate. Thus, pre-sowing treatment on half of the plots was performed on two meadows in Panovci, one in Kančevci and one in Lončarovci, by loosening the grass sward with a rotary harrow. An experimental approach was also taken on two arable fields in Lončarovci, where part of the field was sown only with seed mixtures, and part of the field only with plant residues that remained after sifting (but still containing some seed material). At the end, the mentioned areas were rolled with a meadow roller in order to ensure contact between seeds and soil. Now we hope for rain to help the germination of grasses and forbs of dry meadows, so that in spring we can enjoy the views of our first field results of work on the project.

Read the article on the project LIFE FOR SEEDS website.