Invasive alien species are non- native species that have since their introduction settled so well that drastically altered our native communuties. Because they spread very successfully they reduce species diversity of plant and animals, cause economic damage and even have an harmful affect on human health.They have a exceptional ability to spread and reproduce rapidly in our environment and change native ecosystems. They can even displace native species in a few years. The first alien species were brought by the Romans and are now considered naturalized. For example chestnut originates from the area of Asia Minor, but today we count it among our native species. Tomatoes, potatoes and peppers also originate from South America and were brought to Europe by Christopher Columbus. But not all alien (non-native) species become invasive. Some become naturalized, others dont survive without help. For invasive alien species rule 1:100 applies - one alien species in a 100 becomes invasive.

Giant goldenrod and Canadian goldenrod (Solidago gigantea in Solidago canadensis)
Giant goldenrod is the most widespread invasive alien species in Goričko. Canadian goldenrod occurs mainly in western Slovenia. The species are distinguished from each other mainly by the bare (giant) or hairy (Canadian) stem. Both have yellow flowers arranged in inflorescences at the top of the stems. The herbaceous perennial grows up to 2 m in height, the leaves are lanceolate and sessile. It flowers from July onwards. The seeds have hairs and therefore successfully spread to the surrounding area by wind. They can spread to a lesser extent also by rhizomes. It thrives mainly on forest edges and abandoned meadows and fields. Its spreading can be limited by regular mowing before flowering, thus depleting the plants. Himalayan balsam (Impatiens glandulifera) origins from the Himalayas.This annual plant grows up to 2 m high and occurs mostly on riverbanks and wet meadows. Steam is soft, hollow and ringed, leaves have a glands that produce a sticky nectar. The pink, helmet-shaped flowers are grouped in inflorescences at the top of the stems and very attractive to bees. The seed pots explode when disturbed, scattering the seeds several meters around. The Himalayan balsam preads very effectively by seeds and can form very dense stands. When the stands are few in number, the plants can be pluck out. Flowering or fruitful plants must be incinerated. Dense stands will have to be mowed several times before flowering, thus depleting their abundance. 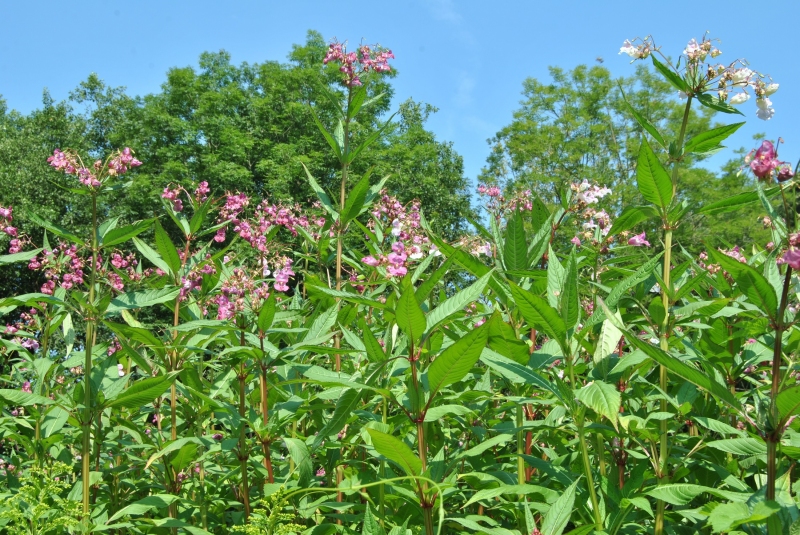 Common milkweed or silkweed (Asclepias syriaca) originates from North America. This perennial grows up to 2 m in height from ehizomes.Leaves are broad, ovate and quite big with redish veins.Pinkish flowers are fragrant and occur in umbellate cymes. The seeds have long, white hairs - eg. name silkweed.All parts of plant produce white latex when broken. The plant is poisonous because of this latex.It spreads to the surroundings with seeds and with the growth of rhizomes and is planted mainly as an ornamental plant in Slovenia. Silkweeed is on the list of non-native species of EU concern and is being addressed under the Regulation on the prevention and control of the introduction and spread of the invasive alien species.In the neighboring countries (especially Hungary) already causes great economic damage dur to its spreading on arable land. The best measure for its removal is by excavation of the rhizomes in the soil. The underground parts and fruits must be incinerated. Japanese knotweed (Fallopia japonica) is eastern Asian species. This perennial grows up to 2 m tall, has a hollow stem and large ovoid leaves.  The flowers are grouped in white inflorescences that flower between July and September. It is propagated by vegetative shoots, by rooting fragments of roots or lower parts of stems. It thrives mainly on river banks and on forest or road edges. Already 2 cm piece of rhizome is sufficient for propagation.The most effective method of its removal is the complete removal of all parts and its incineration. The japonese knotweed should never be disposed of in nature.Regular mowing of aboveground parts eventually depletes the plants, but the results will not be visible for several years. Removing knotweed on larger stands is virtually impossible and requires drastic and time-consuming measures. 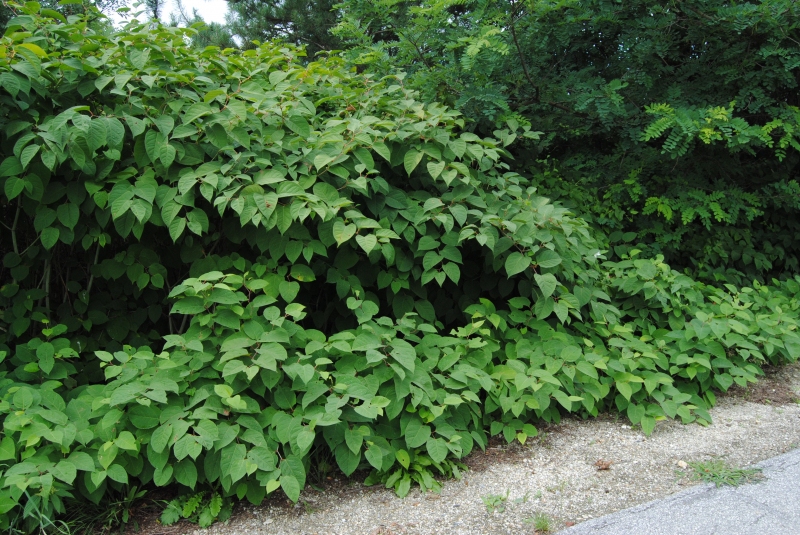 Common ragweed (Ambrosia artemisiifolia) is an annual native to America.Up to 2m tall plant has hairy and pinnately devides leaves. The inflorescences are inconspicuous green. Its pollen is wind-spread and is strongly alergen.Because of that, between July and October when the ragweed is flowering, many people have a health problems.Seeds are numerious and rich in oil and therefore very desirable by birds.
Ragweed occurs mainly on road edges, in fields and on dry ruderal areas. The most effective method of removal is manual plucking. If the plants are removed before flowering, they can be composted, otherwise they need to be sent for incineration. Among the established methods of removal is the use of herbicides, but this is acceptable only if the ragweed is widely spread within the permitted amounts of herbicides. 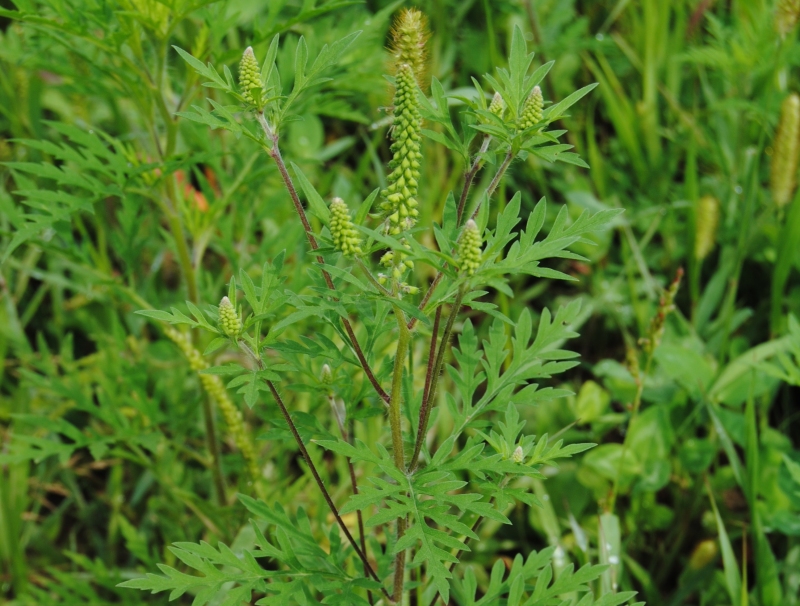 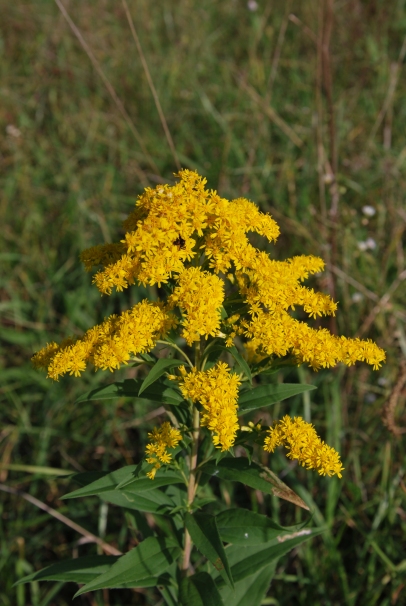 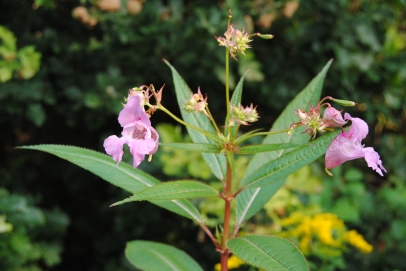 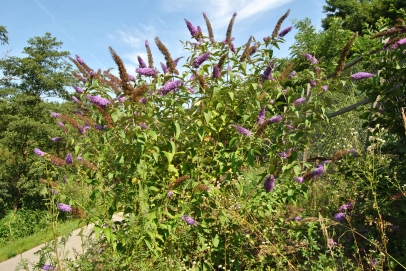 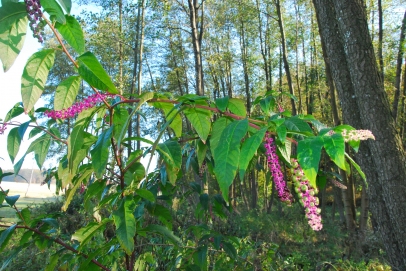 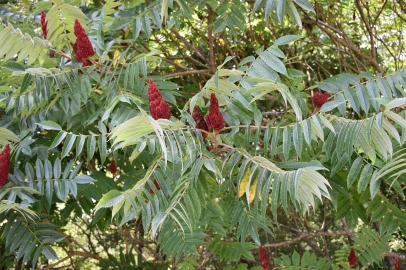