Apart from pottery weaving used to be the most important cottage industry of the Prekmurje region. The key weaving tool was the weaving loom wich are krousne by the people of Prekmurja. Weaving used to be done in the wintertime except those who had no land to farm did it all year round. It was mostly done by men while women helped them with threading the weaving loom, the Dolinsko part of Prekmurje where diffrent, women too weaved. At 18th and 19th century they combined into guilds in Bogojina, Beltinci in Črenšovci. In 1927 there was in Murska Sobota district 10 weavers while in 1957 there was no weaver left in the entire region of Prekmurje. After World War Two – due to cheaper merchandise in stores – the growing of flax started to decrease thus weaving as a craft standard to disappear.

Flax in the field
The so – called »rani lan« was sowed in the spring, March or April and grew ripe on July. There were also cases where people sowed the so-called pozni len in the fall wich grew ripe November. Having grown ripe flaw was pulled outof the ground and festened into sheaves whereupon it was dried. Through so-called rihlanje or riflanje where wooden combs were used the seeds were separeted from the stalks which were then spread in the meadow and exposed to dew, rain and sunshine so that the stalk rind bacame separeted from the core; this process was called plajanje, godenje, plehanje.

Yarn
It was in late autumn that flax was crushed if the crops were meagre fire was built in the glazed tile oven; a seperate oven, a drying kiln for flax, was called pejč or bik, and was of various shapes. Brake, a device for crushing flax, was the most important tool of the women crushing flax, who were called terilje. Prior to crushing flax with a brake, they would sometimes spread dried flax, taken out of the kiln, and beat it first with a wooden mallet. Crushing flax was women̕ s work and it was called trlanje or klanfanje. In the course of crushing flax the inner wooden core with metal cogs, called ščet; in this way, inferior yarn was separated from good yarn and then rolled up into baba, povreslo, kodelja, koudila or figa. 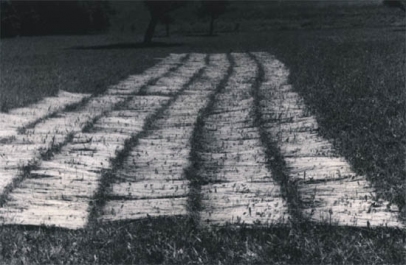 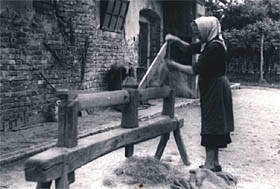 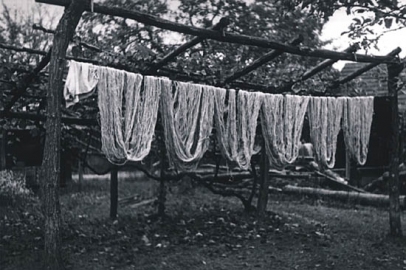 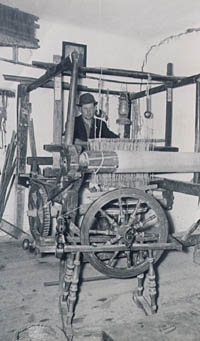 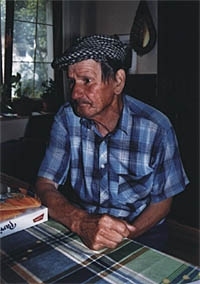