In 2015-2016 Goričko Nature Park Public Institute continued with endeavours for conservation of extensive meadows and to reduce the proportion of overgrown and abandoned meadows on Goričko.

Together with Chamber of Agriculture and Forestry of Slovenia- The Agriculture and Forestry Institute Murska Sobota, DOPPS- Birdlife Slovenia, Faculty for Natural Sciences and Mathematics University of Maribor and company CERO Puconci we in 2015 gained finances Programme  European Economic Area Financial Mechanism 2009-2014 (EEA Grants) worth 280.466,31 EUR to carry out the project Efficient management with extensive meadows on Natura 2000 area Goričko or  shorter Goričko meadows.

The overall objective of the project which had started in March 2015 and it will last until end of April 2016 is efficient management with three Natura 2000 types of meadows, Scops Owl and three butterfly species. For this cause we will with mowing 60 ha of meadows in unfavourable conservation status, with removal of alien invasive species or woody overgrowth and with the harvest of mown biomass improve conservation status of 4 target bird species (Hoopoe, Sadge Warbler, Common quail and Red-backed Shrike), 3 target butterfly species (Scarce Large Blue, Dusky Large Blue, Marsh Fritillary) and 3 target habitat types of meadows.

With informing and raising awareness within the targetet groups we will include 10 new farms in Agri-Environment Climate Schemes (KOPOP 2015-2020) with additional 20 ha of meadows included in this schemes.

More about the project... 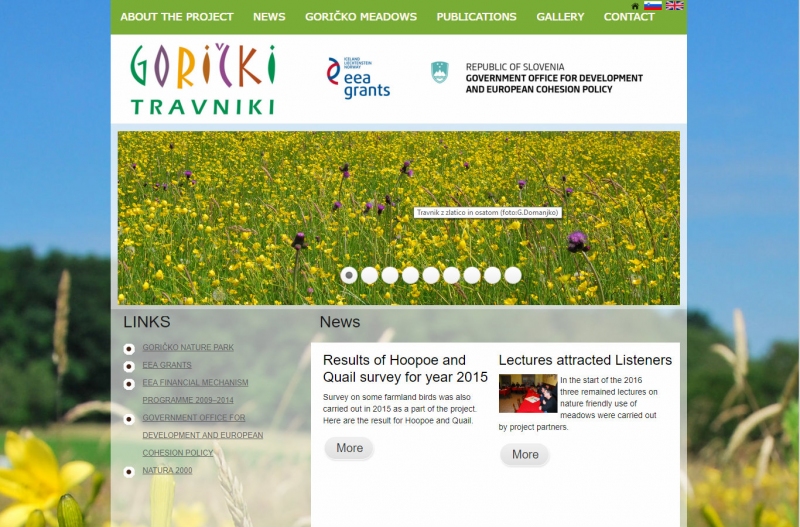